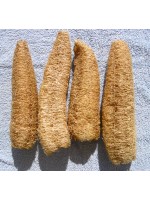 
Native to eastern Asia, Australia and New Zealand, the “Warrigal greens” or “New Zealand spinach” is not a true spinach and was used as a spinach substitute during the early years of European settlement. An edible leafy green, the leaves are high in oxalic acid which must be boiled out before consumption.

Reaching up to a metre tall and up to 1.2 metres in spread, it likes to trail and will form a thick carpet and climb through other vegetation. Named for its four-angled fruits which mature to be hard to the touch and grow throughout the year.

Leaves are diamond shaped and up to 15cm long. Small yellow-green flowers appear throughout the year at the leaf bases.

A reasonably salt tolerant plant, it may grow along coastal areas as it does in its native range. It does not seem to interest insects with few exceptions, so should be safe from nibbling.

While the leaves can be eaten raw, it is considered safer to cook in water due to its saponin and acidic content. Tasting similar to other spinaches, it can be used as an alternative in recipes and has also been used medicinally as an anti-inflammatory agent and a sedative.

Please contact a GP before using in a medicinal context.

Although it can tolerate frosts when established, hard frosts can kill it, prefers a warmer climate above  5°C.