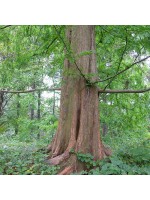 Metasequoia Glyptostroboides is a native to China, it is well known example of a ‘living fossil’ with specimens found in fossil records and was once though long extinct. It is one of the 3 surviving species of the Sequoias, the other two being Sequoiadendron Gigantuem and Sequoia Sempervirens.

It is a fairly fast growing large, deciduous tree with reddish-brown fibrous bark and pale green linear leaves. In Autumn leaves take on a spectacular orange/red colouring before dropping leaves for the winter.

The shortest of the 3 species, however it can still grow to heights of around 60 meters.