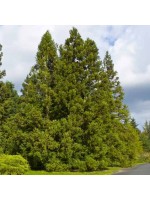 Taxus Baccata is a conifer native to western, central and southern Europe, northwest Africa, northern Iran and southwest Asia, commonly known as English Yew Tree. They are very long lived and can reach 400 to 600 years of age, though some speciments are estimated at  2,000 to 3,000 years old.

It is a small to medium-sized evergreen tree, growing 10 – 20 metres tall, with a trunk up to 2 metres in diameter. The bark is thin, scaly brown, and the leaves are flat, dark green, 1 – 4 centimetres long and 2 – 3 mm broad, arranged spirally on the stem,

All parts of a yew plant (including seeds) are toxic to humans with the exception of the yew berries, which are sweet and edible. Please note toxicity of seeds though.

The seed cones are modified, each cone containing a single seed, and partly surrounded by a modified scale which develops into a soft, bright red berry-like structure called an aril. The arils mature 6 to 9 months after pollination.