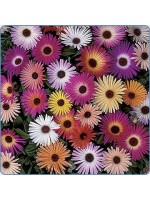 The plant is covered with small bladder like protusions, giving it the appearance of being made from crystals or frozen in ice! (giving it its name!)

It produces flowers with white filament petals from July to September.

A small and low growing species it grown to around 8 - 10 cm high and spreads up to 50cm.

Can tolerate a some cold down to just under freezing, but doesnt like frosts. Should be considered frost tender.