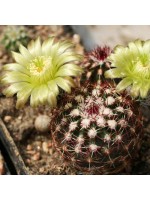 
A type of living stone, these clumping succulents are native to the Knersvlakte area of South Africa, an area covered with quartz-based gravel.

Reaching no bigger than around 5-7cm tall at full maturity, these living stones have egg-shaped leaves that split in the centre, where new leaves grow each season. Only two leaves are produced every season, but plants can produce plenty of offshoots.

Easy to grow, the Argryoderma requires a very well draining, somewhat acidic soil mixture to thrive in. A mixture of river sand, soil, and pumice or rock grit seems ideal for these plants to mimic their natural habitat.

Water minimally during summer, when they go dormant. Winter is the growing period and watering should reflect this. Enjoys full sun during winter, but kept cool and in at least part shade during summer months.