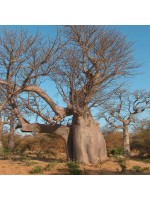 Maclura pomifera, commonly called Osage orange, or horse apple, is a small deciduous tree or large shrub, It is dioecious, with male and female flowers on different plants.

It has heart shaped dark green glossy leaves and flowers from May to June, and seeds ripen from September to December. The large fruit is roughly spherical and bumpy, around 10 centimetres in diameter. It is filled with a sticky white latex. Although not edible, it is thought that seed dispersal was done by mammoths and giant ground sloths eating the fruits before they became extinct!

It grows to a height of around 8–15 meters tall.

Fully hardy to -15C and under.