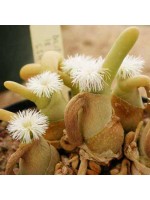 
Pleiospilos are a group of plants from southern Africa re;ated to Lithops, commonly known as Split Rock Plants, due to their appearance of broken pebbles, which are actually pairs  of often speckled succulent leaves.

Pleiospilos Nelii grows with large pairs of leaves, to around 8 cm in diameter with large yellow flowers towards the end of its growing season.

Minimum winter temperature of around 10°C should be maintained, although reportedly hardy down to 5°C
Grow in well drained soil.