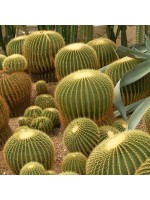 Echinocactus grusonii is a well known species of cactus native to central Mexico, it is popularly known as the Golden Barrel Cactus, Golden Ball or, amusingly, Mother-in-Law's Cushion. One of the most popular cacti in cultivation.

Growing as a large roughly spherical globe, it may eventually reach over a meter in height and diameter after many years. There may be up to 35 pronounced ribs in mature plants, though they are not evident in young plants, which may have a knobbly appearance.  Small yellow flowers appear in summer around the crown of the plant, but only after twenty years or so.

Minimum temperature of around 10°C
Keep dry in winter.