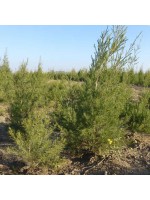 Better known as Rooibos, red tea or redbush tea, this highly popular shrub is native to the Western Cape of South Africa and well known for its health benefits.

Reaching up to 2m tall either erect or spreading, it has slightly reddish coloured branches which gives it its common name. Leaves are green and needle shaped, up to 6cm long growing alternately along branches. Flowers are yellow, around 3cm in diameter, with a fan-shaped lobe. Blooms appear from spring to early summer.

Rooibois tea is made from the dried leaves, which can be drunk 'green', or fermented, which turns the leaves the traditional red-brown colour. The tea tastes slightly earthy and is full of antioxidants. It is also free of caffeine and tannin, making it an excellent substitution for other caffeinated beverages. In its natural habitat it is sometimes consumed by pregnant women to relieve heartburn and nausea.

In its natural habitat can tolerate temperatures down to around -4°C, but should be considered frost tender and kept at 5°C or above and kept dry in the UK.