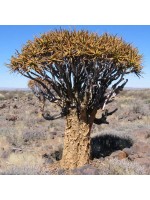 
Found widely across the Western and Eastern Cape provinces of South Africa, this Aloe is very similar to Aloe Candelabrum. Reaches up to 2.5-3m tall with leaves up to 1m long growing in terminal rosettes up to 1.5m-2m in diameter. Leaves are erect to somewhat spreading,  with reddish-brown teeth along its margins.

Inflorescences grow on tall spikes, with up to 8 raceme branches, up to 80cm long, scarlet to orange in colour.